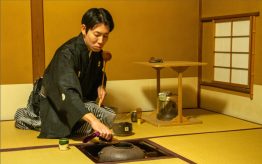 In its 800 year history in Japan the Tea Ceremony has been considered another branch of the higher art forms, analogous to painting, music, dance, sculpture. Through its exposure to Zen Buddhism and Christianity it has continually evolved as an art, its nature deeply rooted in spirituality and religiosity. In this modern era, where art has transformed itself into an expression of individuality and intellectualism, the Tea Ceremony has remained true to its historical roots, a profoundly spiritual and meditative art form.

This Japanese Tea Ceremony follows from the Samurai tradition, when the Shogunate was first established by Minamoto Yoritomo in 1185. For the samurai, the tea ceremony developed into an important cultural attribute for the calming of the mind and to better deeply communicate with the spirit.

Through this Tea Ceremony to take place at the Williamsburg Art & Historical Center on October 13, between 4-6 pm, he would like to introduce and demonstrate the ceremonial form known as a “koicha,” which is said to have been influenced by a form of the Christian mass 400 years ago. Please enjoy this special world created by the interaction between Japan and the West that originated in the Middle Age.