Artist Talk discussing the works in Collective Identity and celebrating the legacy and influence of Toshiko Takaezu
Saturday, April 7th, 3–6 pm
Light refreshments will be served.

Toshiko Takaezu (1922-2011), a Japanese-American ceramic artist known for her closed vessels, became internationally influential by presenting her pots as sculpture. She is celebrated as a formidable modernist whose style is epitomized by unrestrained brush strokes and splashes of glaze over her signature ceramic forms. Takaezu taught for 25 years at Princeton University and for 35 years and was an annual visiting artist at Skidmore College where she made her largest works. From those students she shaped a generation of artists and selected the majority of her apprentices. In 1975, she was inducted into the American Craft Council College of Fellows, and in 1994, was awarded the organization’s Gold Medal for consummate craftsmanship. Of the award she wrote: “Whenever I receive an honor or recognition, I think of my many mentors and feel they have played a very important part in my life…. I would like to recognize these people, most of whom are unaware of the role they played in furthering my career. I am also grateful for many years of teaching, which allowed me to grow and to experiment and should not be forgotten.”1

The impact of Toshiko Takaezu on the field of ceramics and contemporary art is well documented, yet her role as mentor—equally important to her—is too often overlooked. From the mid 1970s until the last year of her life, Takaezu chose one apprentice each year to live and work at her home and studio in Quakertown, NJ. An integral part of that apprenticeship was the biannual open-house in which Takaezu presented the work of the current apprentice throughout her studio and grounds. Since her passing and to honor Toshiko’s mentor/apprentice tradition, the open-house exhibitions have continued.

Featuring work by twenty of her former apprentices and committed disciples, Collective Identity celebrates Toshiko’s dedication to mentorship and helps communicate her excellence as a maker and educator. The breadth of Toshiko’s influence can be recognized through the variety of personal vision of her student’s work throughout the exhibition. 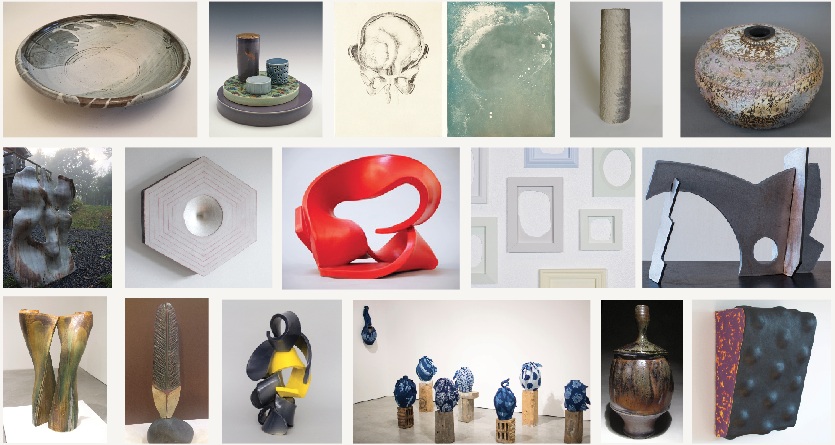 Leslie Ferst is an internationally collected and exhibited artist who resides in New York. She received her MFA from Boston University and her BA in Art History from Skidmore College where she was Assistant Professor of Ceramics in the Art Department from 1993-2012. A native of Atlanta, Leslie has participated in artist residencies at the Archie Bray Foundation, the Ossabaw Island Foundation, and the Watershed Center of which she was a founding board member.

Photos of the Opening Reception Scenes by Richard Sanchez, March 17, 2018

Video from the March 17 opening