Exploring Color and Style in Contemporary Art of the Indian Disapora

Curated by Vijay Kumar and produced by the Indo-American Arts Council, the Williamsburg Art and Historical Center welcomes Erasing Borders 2015: Contemporary Indian Art of the Diaspora. In its twelfth year, this annual exhibition weaves traditional Indian and contemporary Western elements, highlighting the complexities and diversities inherent in these artists’ work. The exhibition runs from Saturday, May 30th to Sunday, June 21st at the WAH Center.

A standout piece at the exhibition was Madonna and Child, by Anna Bradfield. Madonna and Child is a mixed media piece on reclaimed canvas, composed primarily of fine art painting surrounded by found object collage. The center of the piece is a painting of a mother and a baby in her arms. The subtle, genuine expression of joy on the mother’s face, conveyed by her wide smile and closed eyes quietly draws the viewers attention. The background behind the two consists of soft peach, purple, and green colors, fostering a sense of warmth and simplicity in their lives. In the distance, there is a dwelling, perhaps where the mother and child live, and above them are collaged words, such as “I have eaten my honeycomb with my honey.” 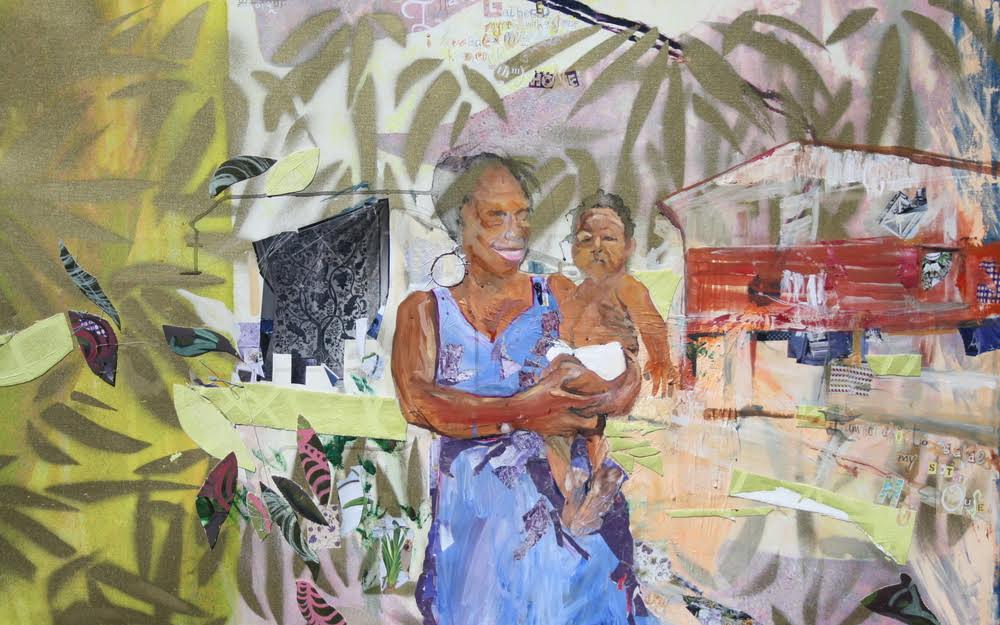 The use of the mixed materials and words around the painting create a nostalgic, tender atmosphere within the art – a time and place in which the two are enjoying the simplicity of a mother’s love. Bradfield echoes this sentiment, explaining, “My work explores reclaiming and recasting the beauty inherent in found objects by melding them with personal stories through my blend of painting, collage and textile. This fresh combination of styles echoes the pluralism of my multicultural background. Half Indian and half English, I have an appreciation for the richness of diversity and detail.” Bradfield skillfully weaves these disparate mediums together into a single piece to create a wonderfully intimate scene of mother and child.

Less subtle and brighter in color was Rahul Mehra’s Sarvottam Quality Television. It is an acrylic on canvas piece where the center is a lime green cow with a bold yellow background. Overlapped onto and around the cow are different media logos, motifs, and symbols that represent the television industry. Mehra’s artist statement says, “his works are deeply connected to themes found in Indian mythology and the social milieu of the subcontinent” and looks at the discourse present in the “modern media of advertising and communication.”

The wide range of diversity in styles and tones throughout the exhibition showcase a rich presentation of the varying experiences that create contemporary Indian art and highlight the diverse backgrounds of the artists who inhabit the Indian Diaspora.

Although the partitions established between various nations within in the Indian sub-continent have inspired years of religious and cultural conflicts, the people from or descended from these nations share strong cultural ties. To showcase the artistic similarities that these South Asian countries have honed, the WAH Center (Williamsburg Art and Historical Center) hosted the Indo-American Arts Council’s Erasing Borders 2015: Contemporary Indian Art of the Diaspora this past June. Viewers not only experienced the featured art on an intimate level, but also got to see how citizens, descendants, and outsiders of this region interact with one another while surrounded by these artistic pieces that speak with their own respective and uniquely represented voices.

To display his fasciation of Indian names, Gautam Rao includes four of a series of twenty-six illustrations in the gallery. Whether or not the illustrated figures are based off people from Rao’s life, individuals created in his own head, or a mixture of both ideas, seeing the illustrations of Alok, Ramesh, Yogesh and Zaheer along with their respective names above their heads recalls cinematic posters and advertisements with individualized character posters grouped together to promote the studio’s productions. With each character displaying seemingly ambiguous emotions, it would be difficult to tell what the tone of the story would be should it be turned into a film. It adds a degree of suspense and intrigue, as one would not know what sort of reactions to feel or prepare for upon purchasing the ticket to this film.

From Left to Right, all by Gautam Rao: Ramesh, Alok, Yogesh, Zaheer

While Rao’s quadruplet of illustrations was one of the more affordable works, there’s a very good reason Veru Narula’s oil painting, “Ocean of Abundance” had one of the highest asking prices in this gallery: it’s literally made out of money. With the inclusion of fifteen different currencies from around the world coated in blue and turquoise paint, there is no satisfaction in viewing this piece from afar as it requires eyes to be inches away in order for visitors to take in Narula’s hidden intentions. Whether or not we are around to see it all happen, no matter where we come from, there will come a time when everything one has worked so hard to earn will eventually be gone as nothing lasts forever.

While these two pieces are vastly different, they each speak to the artists’ journey and work, in part, to convey their unique viewpoints shared by their common origin and divergent experiences. The other works in the show relate to this through a variety of mediums from acrylics to mixed media to express their unique takes on how their ethnic backgrounds define their outlook of a world that countlessly tries to profit off of the resources, history and people of the nations they themselves may or may not call home.