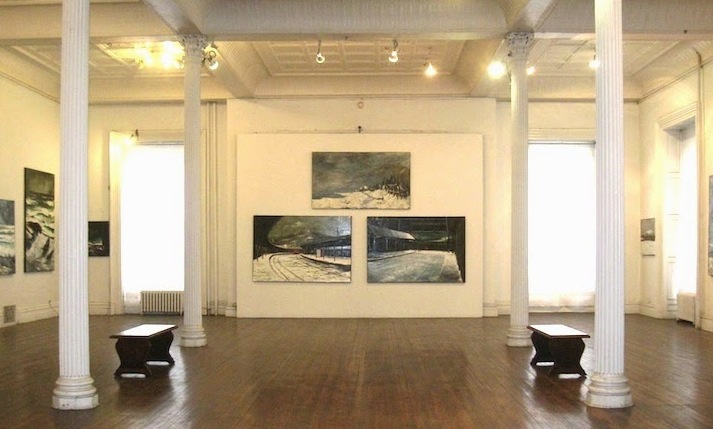 Installation View in Main Gallery of the WAH Center

As New Yorkers look forward to the beginning of spring and warmer days, the WAH (Williamsburg Art & Historical) Center’s latest exhibition “Mototaka Takano: Painting Northern Snow Scenes for 35 Years,” recalls the blistery winter days that have just passed.  In a rare, one-man show, the WAH Center exhibits 23 of Takano’s oil paintings, from March 21st and through April 19th. Regarded as a “Japanese Vlaminck”, Takano is well known for his winter snow scenes; he paints expressionistic landscapes depicting the rough and somber reality of life in Northern Japan. His style of painting recalls the work of Maurice de Vlaminck, who was considered one of the principal figures of the Fauve Movement in the late 19th-early 20th century in France. The Fauvists were concerned with vibrant compositions, using bold colors and loose brushwork to create dynamic, expressionistic scenes. Takano’s canvases present gloomy winter skies, fishing ports, freezing stations, rough seas and villages in the Northern Japan, mainly in Tohoku and Hokkaido. 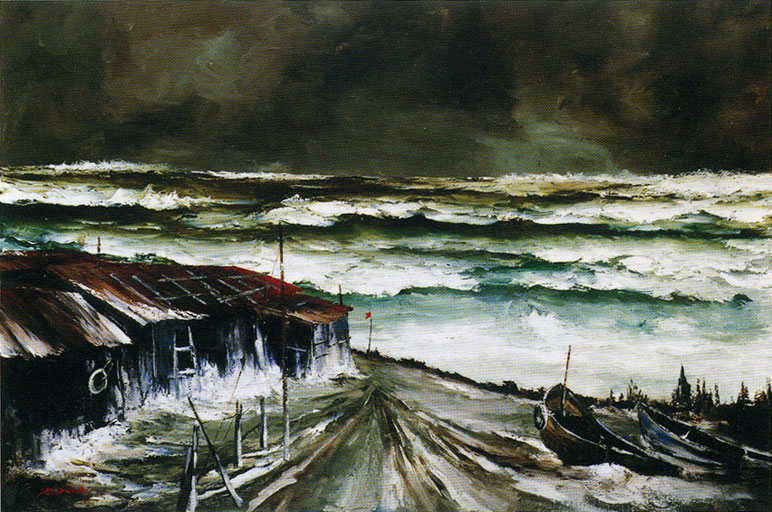 Supported by the Consulate General of Japan in New York and New York Seikatsu Press, the opening of the show attracted many art enthusiasts. At the opening reception, guests enjoyed live music by cello player, Mohit Mansukhani, who chose several Bach compositions to match Takano’s dark, stormy works. The artist himself was extremely satisfied with his exhibition at the WAH Center. He admitted that is was one of the best show he has ever had, among the impressive number of 236 exhibitions he has had in the past. Founder and Artistic Director of the WAH Center, Yuko Nii, said, “the reception made a good balance between what we saw on the walls and what we felt in the gallery: the warm ambiance created by the viewers contrasting to the nature of his paintings with their cold, desolate snow scenes and the bleak, somber nature of the hard life in the Northern Japan. A harmonious contrasting balance was definitely felt in the gallery.”

Takano’s paintings are very moving and seem designed to evoke an emotional response. It is intriguing how perception of the works changed from when they were first unwrapped to when the exhibition opened. From the first glance, they were powerful, but seeing them arranged on the walls heightened their intensity, with the breathtaking, powerful landscapes artfully curated by Nii. The overpowering and formidable nature of Northern Japan is shown in the thickly applied paint and wild, yet deliberate brush strokes. The windswept skies and tumultuous seas appear pushed up upon the picture plane, overshadowing the small houses, fishing boats, and figures on the shores. It is not always clear where sea and sky end and ground begins, hinting at the powerful, consuming effects of the winter weather. 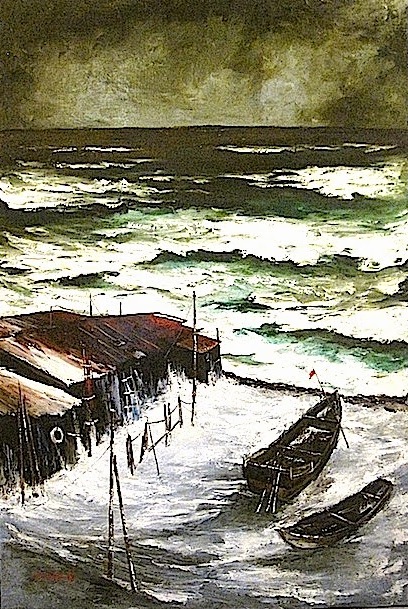 The rough seas, desolate shores, and and sharp cliff edges appear very dramatic and intimidating at first glance, but are softened by the emotional element that is added by the figures in the paintings.  A lone person walking down the road in an empty Japanese fishing village creates a unique relationship between the viewer and figure in that painting. I felt provoked to join the lonely looking figure that staggers bundled on the empty paths, seemingly devoid of company. Takano paints a heartbreaking, sad story with this person walking alone, being surrounded by nothing but snow and just a few small houses that look like they have not seen a soul in years. Intriguingly, this lonely, stoop-shouldered silhouette appears often clad in the same vivid red cloak. It made me wonder, what is the artist trying to express by showing a journey of this single human through these cold and empty Japanese villages? 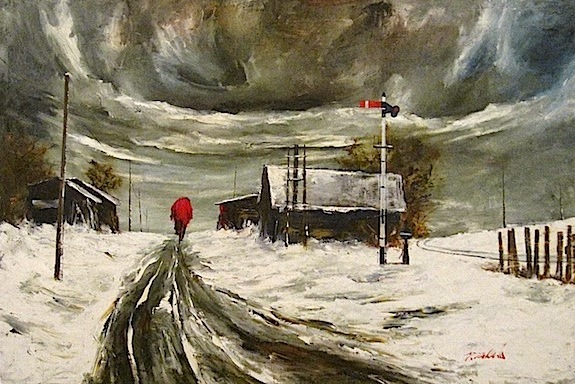