Last weekend the WAH Center made a unique contribution to the Brooklyn Book Festival. The festival attracted many families in search of a fun-filled autumn afternoon strolling through the hundreds of vendors lined up throughout the Brooklyn Borough Hall and Plaza. Entertaining all ages with crafts and an interactive “Where’s Waldo” for the children, and tents providing literature for book lovers of all ages. 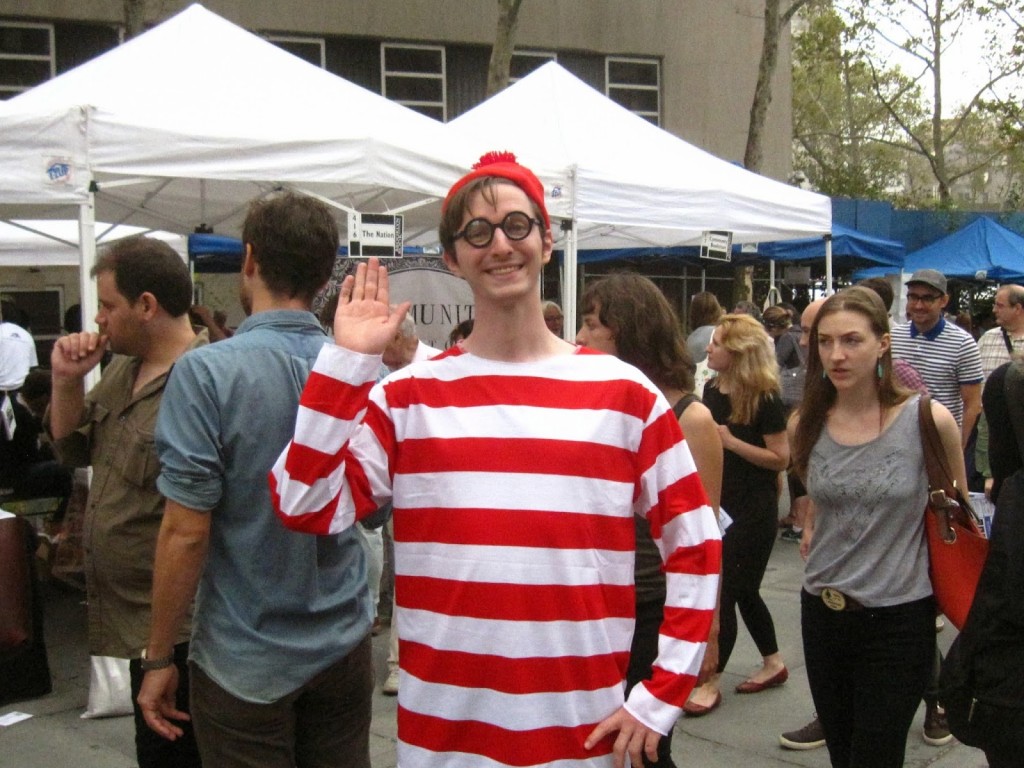 Lindall’s rendition of Milton’s Paradise Lost bound in luxurious red and green velvet, beckoned every child to leaf through the enormous book, much to their parents dismay. I think the parents feared the electrifying images of Sin, Satan, and hell would torment their little son’s and daughter’s dreams for weeks, but rather than being frightened by Banez’s and Lindall’s work, the children were entranced. One girl even gave us a reading of a couple passages of Milton, to after which she turned to her mom asking, “Is this all about hell and stuff?” This is what I thought to be most surprising about the day. That in a fair full of crafts, games, and children’s books so many kids dragged their parents by their arms to have a “date with the devil,” thus proving what Lindall and Banez expressed; the devil’s temptuous grasp of on our Earthly wold affects us all. 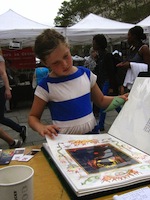 I stepped away from our booth for a nice warm tea from the various gourmet food truck vendors parked at the edge of the festival. It was a pleasant fall afternoon, overcast, but pleasant. During my strolls through the festivals grounds I weaved in out out of the booths of various publishers and literary genres. Each tent held a book that personally called to me, tempting me like Beelzebub. Screaming, “Rachel, learn to make tasty frozen dairy treats.” “Rachel, look inward and philosophize on the innate nature of creativity with us.” “Rachel, this novel is so more interesting than the management textbook you are reading for class.”  Vendors saw my intrigue and pounced, but alas, my pockets did not allow me to adhere to the literary sirens. Which is for the best, shoe-box manhattan apartments are not conducive to book collections. Though, my cover gazing, back cover synopsis, and inhaling the fresh of the press scent as I leafed through the pages was deeply satisfying.

Back at WAH Center we had a wide range of eclectic gatherers at our booth, from Milton scholars to Ministers, sparking religious debates with Lindall and inquiries on Banez’s colorful demonic philosophy. Each visitor tried to engage me into the discussions and force me to recall my biblical knowledge from years of Catholic schooling. We may not have sold anything, but the day was incredibly  thought-provoking and lively sitting between these two wild artists.