It’s hard to ask why and scrutinize over answers, and it’s nerve-wracking to try and find a ‘why’. Yet a group of select few that have the courage to simply answer ‘why not’, they stand out from the crowd. In Pop Goes The Weasel, there seems to be no boundaries. Nothing is out of reach for an artist who knows they can create anything and everything they want, and it shows in the works spread around the room of WAH Center.

Curator William Norton handpicked these artists. He went to great lengths for them to create original work for this show, explains how Pop came to be. Norton has met most of these artists during his time in Japan, and all of them he is deeply impressed by. Especially the women. When he had a chance to put together a show, he chose mostly women. 15 women and 4 men, to be exact. Why? “Why not? Women are amazing, they are amazing artists, these women deserve more than anyone to have their work shown. There are not enough women-heavy exhibitions,” he responds, fired up.

The show brings together an interesting group of artists from Japan and USA, and the craft and artisan in the works demands the attention of the viewer right away. A lot of the work is clearly out of the box, most are not your regular canvas paintings. In the middle of the room, there is a full glass life-size woman by Arlene Rush, sitting on a stool thinking, the glass is a soft blue with an earthly red peeking from the inside. Some of her small glass pieces have fallen around her in a spiral, like she is breaking down and recollecting herself in her thoughts at simultaneously. On the wall across the entrance is a “Panorama of Celestial Peculiarities”, by Marcela Silva. When you stand in front of the work, you cannot help but inspect the individual pieces and wonder where you must fit in this system. Size definitely matters as many of the installation works dominate the space around them, yet never overpower each other. 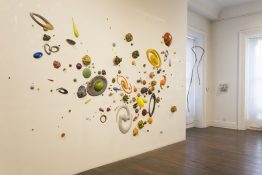 There is a balance between the very large floor works, and the paintings on the walls, and even the tiny nail artworks by Yuki Okamoto, scattered among the wall works. A manicurist in Japan, she chooses to recreate pillars of art history on nails: Warhol, Vermeer, Picasso, Hokusai.

One of the works that the visitors at the opening keep circling back to and standing in front is a video. Some watch in silence, some are giggling spontaneously, a little girl in a pink tutu visiting with her mother is captivated and her eyes won’t leave the screen, even if Norton’s puppy tries to bug her. This is a feat, managing to keep a child’s focus when you are competing with a cute puppy.

The video is by Koto Takei, Video Performance of Joy. Takei is one of the artists Norton sought out to get an original project made for this show for him to bring to USA. She is trained in ballet and contemporary dance, also having studied Body Language and Cinematic Arts in Japan’s Rikkyo University. She has choreographed a performance that tells a story, moving from one location to another in the depths of a Japanese suburb. It’s stop motion, with a soundtrack and a lot of small moments in the ‘dance’ that make the audience chuckle, but marvel at her talent in movement and expressing emotion. The surrealism hidden in her video makes the audience want to understand, yet never really get there, which is even better than having closure. 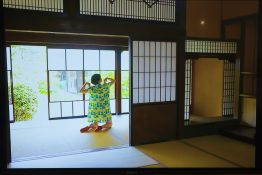 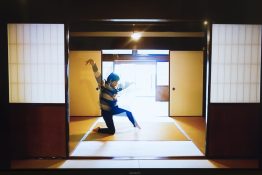 There is one part of the show that not everyone gets to see. Around halfway into the opening reception, a few bodies covered in black and masks walk among the group and people part to let them pass in shock. They come to stand at the vinyl floor sectioned off in the middle of the room, and take their positions. For the rest of the opening, we get to witness a dance, a story, a play, an experience. There is no one category that the “band” Dirty Churches fits in, yet the performance piece is powerful and loud and captures the audience.

Norton has managed to create cohesion among chaos, and prove that there is no reason why ‘why not’ is not an appropriate answer to the question. In fact, it seems as though if we go through with just taking chances, things work out in the most surprising way. The exhibition is a living breathing proof.