The WAH Center is pleased to announce a retrospective of the art of Terrance Lindall in May of the year 2000. Besides the exhibit, Mr. Lindall will recite excerpts from his book PARADISE LOST ILLUSTRATED (poetry by John Milton) and also lecture on philosophy of art and aesthetics, as well as related metaphysical & epistemological issues. 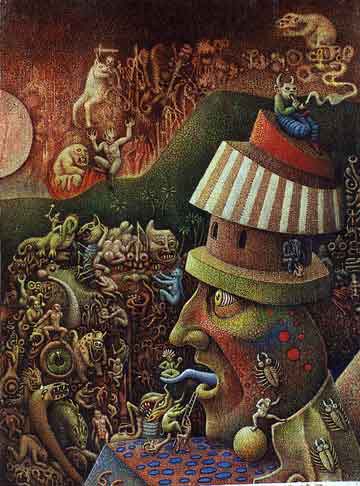 Terrance Lindall's surreal/visionary art has graced the covers of numerous books and magazines and has been exhibited at many galleries and museums over the past 30 years. Here are some of the things that have been said of his art:

"It is nice to know there is a latter day Bosch around"-- Dr. Leo Steinberg, Art Critic

"Clearly avoiding the view that Pop imagery is inherently a sign of trauma, Terry Lindall employs the cartoon elements of style with a charming and often unnerving directness and simplicity, frequently aimed at causing a trauma all his own. This is particularly the case with his illustrations of Milton’s Paradise Lost, with which he reaches a hyper-intensified and nearly hysterical verve. "
--Mark Daniel Cohen, Critic for Review Magazine and NY Arts Magazine

"...since I was a teenager back in 1982... I’ve considered Terrance Lindall one of the globe’s greatest artists. My particular favorite is his intense adaptation of PARADISE LOST, which never fails to instill a pervasive dread in my mind."
-- Greg Fasolino 1997, "Natural insanity" Art Alternative Magazine 1996

"Lindall's use of color & detail to acheive effect, his dramatic compositions, but most of all his totally unique vision make him a new wave artist to be reckoned with."
-- Louise Jones, Senior Editor, Warren Communications 1980

"My reward for the purchase of a Lindall masterwork has been a cover that draws raves. It is a very valuable addition to my collection of fine art."
-- Stuart David Schiff, twice winner of the World Fantasy Award & editor of the acclaimed WHISPERS anthologies

The magazines  CREEPY, EERIE, VAMPIRELLA, HEAVY METAL AND MARVEL'S EPIC, and Rod Serling's TWILIGHT ZONE,  for which he produced some of the most dazzling art of an era, are now highly sought after collectibles. The work he did for these magazines is part of the history of an important American art form which has influenced many young persons and would-be artists growing up in America and around the world.

Apart from being an artist, Terrance Lindall has a background in philosophy and has been active in the intellectual realms of the Williamsburg Brooklyn art community over the past few years. His recent essay THE CALCULUS OF TRANSFIGURATION assesses the new artistic trends in the contemporary art world and it’s context in new thinking about fractal geometry, quantum mechanics, historical will, and epistemological and analytic traditions. The shows which he has recently curated, Charles Gatewood's THE BODY AND BEYOND (1997) and APOCALYPSE 1999, electrified Williamsburg and the international art world. APOCALYPSE 1999  was the most lavish art production seen in Williamsburg to date with over 125 artists from around the world and incorporating many provocative musical and theatrical productions.

Terrance Lindall is also a builder of institutions such as the Greenwood Museum in upper New York State, and has worked with Yuko Nii in developing the Williamsburg Art & Historical Center which has achieved international recognition in the emerging art world.

In May 2000, The Center will display selections of Terrance Lindall’s art spanning 40 years. The art will be couched amidst the Center's historic archive of illuminated miniatures and wood block prints going back as far as the 15th century, showing the tradition of the illustrative art for which Terrance Lindall is publicly known. Although most artists doing work for magazines or books work in a larger format, Mr. Lindall's work is with some exceptions smaller than the page of the magazine for which he creates. He has in mind when he does this the tradition of master miniaturists going back to the Renaissance. Mr. Lindall likes to point out that the most expensive works of art in the world (per ounce) are illuminated miniatures.