Curated by Yuko Nii, Founder/Director of the WAH Center

Ever since I saw “The Book Art as Art” show at the National Museum of Women in the Arts in Wash. D.C. three years ago, my mind and eyes started capturing the book arts landscape like a camera, and I envisioned a uniquely different kind of collaborative show on the Book Arts at the WAH Center in which I invite two outside curators to showcase their own selected artists’ works along with my own selection. I thought it would be interesting to see each curator presenting distinctively different aesthetic judgements on Book Arts. I called the show, “Tri-Fold: New Perspectives on Book Arts.”

I invited artist/independent curator Nelleke Nix in Seattle, WA and curator Ana Maria de la Ossa of the Nohra Haime Gallery in New York City to join me. For my own part I decided to have an open call juried show so I could have a great many submissions to choose from. To my surprise I had to choose from over 500 images, an overwhelming but delightful task, for I was able to select many different types of high quality art from altered books, cut-outs, pop-ups, accordion types and, further more, cutting edge in which the unimaginable happens which one cannot easily relate to book art. I named my own part of the Tri-Fold show as “Special Choice.”

According to our original plan, the "Tri-Fold: New Perspectives on Book Arts" was to end on Nov. 27. I am happy to say that the show has been well received, and considering the fact that some viewers expressed their wish and also my own wish not to close the show so soon, I've decided to extend the "Special Choice" until Jan. 9, 2011. While the other two curators will dismantle their shows on Nov. 27 as originally planned, in order to ship back the works on time, my artists in the “Special Choice” are flexible and were very happy about leaving their works much longer.

In the “Special Choice, Part 1” show the works are mainly small size book forms with mainly paper medium, being displayed on the pedestals and tables. To contrast to the “Part 1” show, for the “ Part 2” show, I tried to choose some larger wall or floor installation pieces, and more with cutting edge presentations. Some are with technological equipments such as live video, sound, electronics, and some with the medium such as steel, brass filing, glass.

So, what you will see in the gallery is a wide scope of Book Arts, combined in the “Part 1” and “Part 2” shows- altogether a variety of humorous, strange, fantastic, and fascinating. They are panorama/ smorgasbord samplings of what you might find in that expansive and ever-flowering field of book arts!
— Yuko Nii

In the 2nd floor Small Gallery

One Person Show of Painting and Photography by

Preceeded by a Musical Interlude by Peter Dizozza

and on view:
The 1632 edition of Hamlet & Macbeth by William Shakespeare
(from the collection of the Yuko Nii Foundation)

TERRANCE LINDALL illustrated JOHN MILTON’S PARADISE LOST in the late 1970s. His illustrations for PARADISE LOST are today the best-known illustrations for this epic outside of those by William Blake and Gustave Dore and prints of his work are in major international collections. Lindall's Paradise Lost Illustrated was published in a small press edition in 1983, and some of the plates appeared in the popular Heavy Metal Magazine around that time. For more details, click here: "Lindall's Official Paradise Lost Web Site"

Lindall's art for Paradise Lost appears on the 2008 cover of The Complete Poetry and Essential Prose of John Milton, released by Random House 2008. Holt Rinehart & Winston uses another Lindall Paradise Lost image in the 2009 high school textbook, which had a first run of 370,000.

Special Display: Produced in John Milton’s lifetime: the 1632 second folio edition of the works Hamlet & Macbeth of William Shakespeare. "On Shakespear" was Milton's first published poem, appearing anonymously in this second folio of plays by Shakespeare. King Charles I (against whom Milton & Cromwell rebelled) owned a copy of the Second Folio, which became part of the library of Windsor Castle; Charles II's copy is in the British Museum.

Below: The large format Giclee print limited to an edition of 50 (a copy is already in the collection of Dr. Robert. J. Wickenheiser Milton collection) 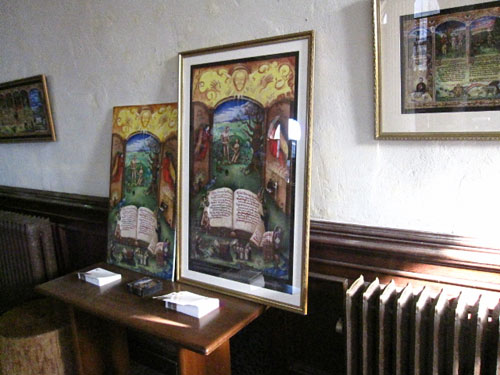