This show is to introduce mainly local Japanese artists (and some artists from Japan) who are pursuing their career in New York City, and presents a “Japanese ‘Multi-Talented Showcase” including not only fine art, but also a range of creative fields such as textile, ceramic, book art, video art, craft art, even one commercial “shoe” designer’s work, It is indeed a big presentation of 110 artworks by 69 participants in the show”

These artists of varied genders, ages and career stages have expressed themselves in their own chosen medium so that we can see and understand where their minds and hearts are at while living and working in the midst of “the Richest Cultural City in the World, our “Beloved New York City.”

For 10 years, the WAH Center hosted the Annual J-ART show in March, curated by Mr. Hiro Shiraishi in Tokyo, bridging the Megacities, Tokyo and New York City, featuring emerging Japanese artists who lived in Japan and some in New York City. The collaborative atmosphere and fresh perspectives were inspiring. Unfortunately Mr. Shiraishi’s “J-Art” shows ended with his 10th Annual show last March, 2018. So, we thought this would be the perfect time for the WAH Center to present fresh Japanese talents to celebrate the WAH Center’s 23rd Anniversary Year. Although our founder and artistic director is Japanese, this is the very first Japanese artists’ show she is curating. She said “I am very honored, humble yet very proud to be able to introduce to our audience through this special exhibition, some of the Japanese talents, who ventured beyond Japan’s rich culture, traditions and heritage in order to experience a new artist’s life in New York City.

For curators, Yuko selected three outstanding Japanese artists who live and work in New York City, and who have participated at the WAH Center in the past, and who have also curated their own exhibits elsewhere in the city. They were asked to collaborate to make this large scale Japanese show possible. The uniqueness of this show is that the assigned curators will be curating and showcasing their own selected artists in their own section of the gallery as “Section Curators” along with Yuko Nii. So, we will see the distinctive artistic sensitivities and visions revealed in these different curatorial sections. Because this show is a overview of these Japanese artists in various age groups and various stages of their artists’ journey, we are hoping that this exhibition can stimulate and inspire many individuals, leaving a positive impact on all of the artists and the viewers as well.

Yuko says, “I believe strongly that our human nature seeks to know what is beyond the horizon, to the unreachable beyond. There is no limit to human creativity. No matter how old and how many achievements we had made in the past, as long as our curiosity lasts and as long as our desire and curiosity meet each other at one point, there is no end to what we can achieve. Thus, every artist wishes to continue facing challenges trying to reach unknown possibilities. In facing the challenges and overcoming obstacles, the artists finds within who he/she really is, and finds the answer to the question of “Why does an Artist need to create?” And by forever reaching we find a ‘New Japanese Horizon’!!!”

We will publish a full color catalogue of the show.

Please join us to experience the unique exhibition and judge yourself where today’s Japanese artists’ minds and hearts are at while living in the midst of “The Big Apple” , New York City! 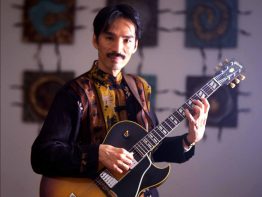 Yoshiki Miura is a jazz musician, a 30 year veteran who has been performing in the New York City area. His music crosses the traditional modern jazz boundaries, injecting R&B and Latin styles. He is a graduate of Berklee College of Music, Boston. His numerous performances include; his own band’s music tours in Japan, and “Grand Central’s Anniversary “,”JVC Jazz Festival at Saratoga”, “Live at the Blue Note in NYC and Milano”, and the “Texaco New York Jazz Festivals “. His composition “KK” was used in Episode #312 of the HBO Show “Sex and the City”. He was also selected for a recording session with EMI label under the Amalia Gre group and to perform with her music tours in Italy.