I was unable to make it to the opening reception of Press: Pause, the New Paltz MFA student art show. So, when I came to the Williamsburg Art and Historical Center, I came without a clear idea of what this show would entail. Initially as I was walking into the space to turn on the lights, I was amazed with how filled the space was. There were so many large pieces taking up the floor space and the walls of the gallery; the atmosphere I gathered was chaotic and powerful. Many times, the gallery by itself with its large windows that let in a lot of light, bouncing around the white walls and high ceilings, gives the impressions of an airy and spacious aroma. But today, the space transformed into a whole new emotion.

The chaos that is felt is thematic within many the pieces of art that can be seen. I think that a lot wants to be said by these artists, reflecting the current and past political and social climates, the philosophies of the generation, the influences on the influenced. What they produce speaks to the qualities of their mind, like any piece of art, but also to the qualities of the time, because they are all in the same age range and working towards the same goal in the same space. 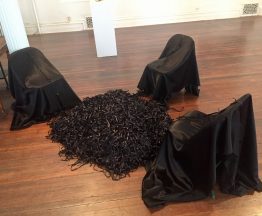 Untitled mourning sits towards the front of the gallery, cloaked in black at such a contrasts to the white walls I’m used to. It invoked a sense of despair though I didn’t know of what or if it was tangible to me. When I flipped through the catalogue, I read about how a group of artists, including Maureen McCourt who was the artist that created the project, were tying the group of ribbons that sits in the middle of the chairs throughout the opening reception. As described, each ribbon represents a life lost to gun violence. To the right is a picture of what I saw of the work. 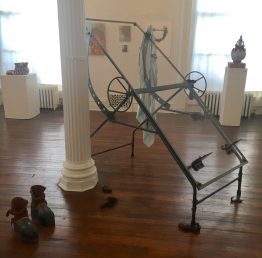 Immediately across of McCourt’s piece was Rosary Solimanto’s Rise of the Cyborg. This piece shows the historic human reaction to dealing with disabilities. She wants to bring awareness to the injustices done to people with disabilities, in the past and what continues of it today. I bring this piece up because it shares similar values to McCourt’s piece, as they both deal with social issues and events that are relevant to the time, and could be different in the future with mass acknowledgment. I believe both these artist are trying to bring to light major issues in society, and it speaks to the current social issues that these artists and many other people today think about. These are both large pieces in stature, the chairs and the shoes and ribbon and hair represents where humans once were, and that show an importance to the subject. 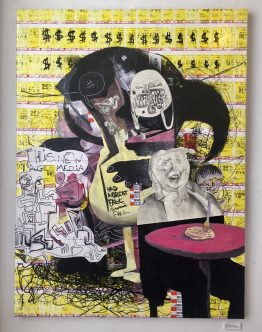 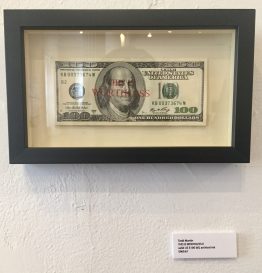 And then there are pieces exposing corruption and manipulation. Paul Van Atta’s Mar-A-Leggo-My-Trumpty-Eggo confront media manipulation in the age of easy access to information and expanding infotainment. Atta shows the absurdity and humor of it all combined in the collage. Similarly, Todd Martin stamps “This is Worthless” onto a one hundred dollar bill, showing economic influence on today’s society. These are valuable ways to communicate through the universal platform of art to onlookers and the viewers of today, maybe those in generations to come, what is speaking to an artist. 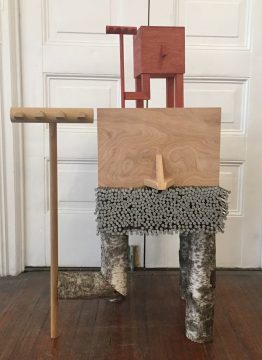 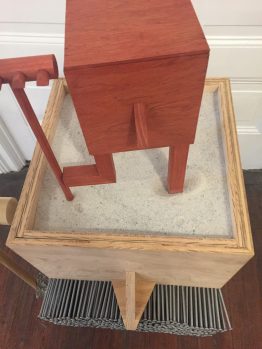 However, not all of the artists in this gallery show these social, political, or economic views. Many create works that involve subjects about space, volume, size, movement, and reality in its primitive sense–or rather our primitive senses upon reality. One of the pieces that really caught my eye was about how our senses, and the way in which think and emote, are imposed onto the inanimate objects around us. The Zen Man sculpture by Jake Demenkoff shows how easily and innately we personify the things around us. Zen gardens developed as a way to explore the mind and its most essential values, a person would care for the garden and at the same time, care for their mind. A person would learn a lot about nature and come to terms with simplicity and tranquility throughout life. I assume this is why the zen garden is upon the larger statue’s head, where we would figure the statue’s brain to be, and the rake acts as if one is caring for their mind, much as the qualities of Zen Buddhism goes. But his sculpture came off to me as a father figure, with a beard that is graying along with his appendages and large nose. I can also se how he is with a smaller child on top of his head who is red and youthful due to his smaller size and smaller nose. Both are holding rakes, as they both are working together. Truthfully, it is our mind which imposes these views, making us empathize that a triangular piece of wood in the middle of a square is a nose, even though there are no eyes or mouth or expression shown, simplicities that explain how our brains work, like the simplicities zen gardens try to show us. It takes a second of pause to realize we configure humans out of objects like this, many people may pass by the piece and find humor in the monster looking made-up sculpture. And the humor off-sets a lot of the more powerful pieces, which I also like, but the fact that we do create that explanation for the piece, and the subtly realization we have about the human condition, is what makes this piece stand out amongst those that speak towards the social constructs of today. The layers that can be confounded through our mind about a piece of art that is exploring the mind through the Buddhist theme is a powerful piece of aesthetic art.