In the Main Gallery: 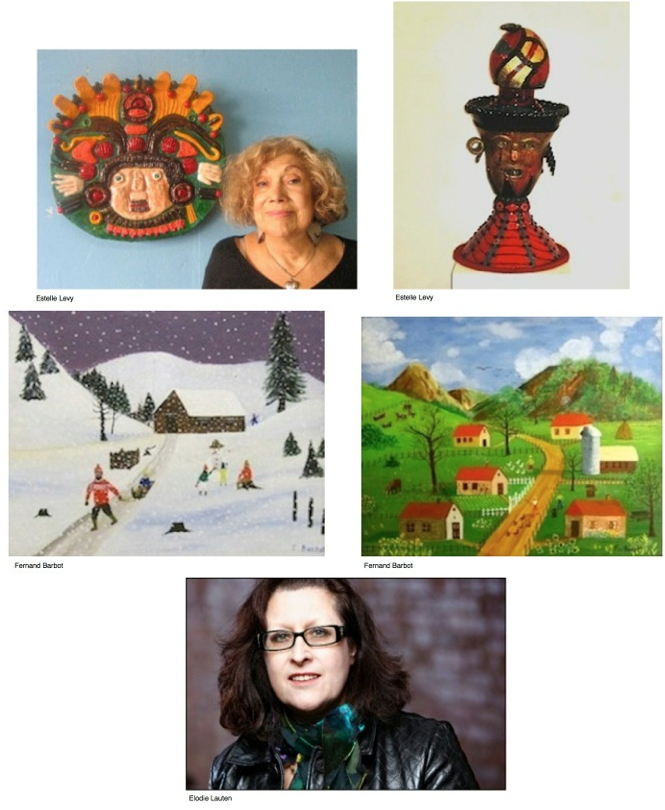 The WAH Center is pleased to present “Memorial” honoring our beloved artists – Estelle Levy, Fernand Barbot, and Elodie Lauten – who have passed away recently. During the fine arts show, the music of Elodie Lauten will be heard.

Though Estelle Levy and Fernand Barbot were from totally different cultural backgrounds – Estelle was a female American ceramic artist while Fernand was a male painter born in France – they both shared similarities in age and the late start of their art careers. Whereas Estelle referred to herself as a “self-employed artist,” and Fernand called himself a “self-taught artist,” both found unique visual languages to express their inner vision in both 2-dimensional and 3-dimensional works. With strong personalities and distinctive characters, hard-working and strong-willed natures, Estelle and Fernand were both kind and sincere, full of wit and wisdom, which they shared with other artists and fellow citizens.

A French-American “avant-garde” composer, Elodie Lauten’s fresh and innovative musical language is a unique combination of Western and Asian music. She introduced us to a new universal musical language. Elodie performed at the WAH Center several times in the past. With each performance she demonstrated new sounds and tones that provoked all five senses – her music resonates in our minds and hearts, and will stay with us for a long time.

All three of our dear friends made our lives more interesting, colorful, and meaningful. Their presence will be missed, but their art lives on.

As stated in “My Personal Statement,” Estelle Levy searched for her inner world through art:

An art expression is an inner image transformed into line, form, shape, color, movement and surprise. There is in me an inner world about which I know very little. My way of explaining is to refer to Jungian ideas of the Collective Unconscious and Ancestral Memories. It is only after I have completed a work that I can dwell on it again and come to understand it more fully. I find it is essential to take inner risks, to be unafraid of this inner world and one’s inner self for that is where creativity and originality reside. Taking risks and being unafraid allows for spontaneity, permits that which is still to seem as if moving, sharing and feeling.

Estelle attended New York University, Yeshiva University, Hunter College and Columbia University, and she studied art at Alfred School of Design and Greenwich House. She was a member of the American Association of Museums; American Society of Contemporary Artists; Artists Fellowship, Inc.; Government Accountability Project; Fourteen Sculptors Pro Arts; The National League of American Pen Women, Inc.; National Museum of Women in the Art; and The WAH (Williamsburg Art and Historical) Center. She had numerous exhibitions and received many awards such as National Association of Women Artists and Salmagundi Art Club Merit Award. She was invited to give lectures and was interviewed by various workshops and social media. Estelle Levy passed away on May 27, 2014.

Fernand was born on June 17, 1930 in a small village near Paris. His family moved to Paris when he was 10 years old during the German occupation of France in World War II. He finished his primary education with honors despite the difficult circumstances surrounding him. He became an electrician’s apprentice and joined the union. He married at an early age and started his own family. In 1957 he emigrated to the USA with his wife and two children, and settled down in Brooklyn, New York. He became an American citizen. He continued to work as an electrician and joined the International Brotherhood of Electrical Workers Local Union #3. In the early ’70s he began to paint with acrylics. He participated in a Festival of the Arts organized by the Union. He submitted a few abstract paintings. There he met Dr. Rene Shapshak, the cultural director of the event, who suggested he look at the work of Grandma Moses. This fueled his imagination and he started painting in a naive/primitive style depicting his childhood memories of the countryside and city street scenes. Several years later he met the sculptor Anthony Gennarelli who encouraged him to try carving stone and wood. All this time while working during the day and raising a family, he was able to express himself on holidays and weekends. Regardless of him being labeled a “Sunday painter” he found galleries to represent him in the U.S. and abroad. He won numerous awards and his works are in many private collections. Fernand taught himself how to paint, sculpt, make jewelry, do graphic work and collage. He retired in 1990 and devoted the rest of his life to art. A man with an inquiring mind, he was a world traveller, a loving husband and father. He overcame many obstacles and stayed positive. He continued to satisfy his thirst for knowledge. He filled his life with song and humor. A true inspiration. Ha passed away September 26, 2013, but his memory and art live on.

A French-born American composer Elodie Lauten was a classical pianist in Paris. After relocating to New York City, Lauten studied Western composition and Indian classical music at New York University, where she received a Masters Degree in Composition. A composer of operas, theater pieces, orchestral, chamber, and instrumental music, Elodie was recognized in North America and Europe as a pioneer of post-minimalism and a force in avant-garde music with over 20 releases on a number of labels. Her music is influenced by astrology, hexagrams of the I Ching, animals, and modes of her system of improvisation, known as Universal Mode Improvisation (UMI). A combination of two contradictory models – the cloudy, beatless stasis of minimalism and the tonal melody and ostinato of neoclassicism – Elodie’s incredibly unique sound led her to be known as one of the most talented and creative contemporary musicians.

Elodie taught at New York University, New York City College of Technology of the City University of New York, and elsewhere. She received numerous awards including the National Endowment for the Arts, American Society of Composers, Authors and Publishers, Meet the Composer, and more. Most recently, she was the 2014 recipient of the Robert Rauschenberg Award from the Foundation for Contemporary Arts. Her work has been performed at many of New York’s most iconic venues, including the New York City Opera, Lincoln Center Festival, and the Whitney Museum; as well as in Paris at the Musée d’Art Moderne; among other places. “Walking in New York,” Elodie’s best-known composition, is a chamber opera setting to the poems of her close friend, Allan Ginsberg.

“Praise, admiration, and respect in elegy for the artiste-musicienne composer Elodie Lauten continue to resound since her death on June 3, 2014, with tributes far and wide: she was distinguished, diverse, cross-cultural, international, and—as per her own quest—even cosmic. With conviction and certainty, she proselytized about the scientific-magical powers of music, its essential role in the course of the universe. While she marveled at exploring sound potentials in electronic music, microtonal and foreign idioms, above all else she wanted her music to be performed acoustically with the detailed nuances of Baroque music, and she altogether respected vocal (or as instrumental) lyricism, counterpoint, idiomatic instrumental sounds, and traditional orchestration. She smiled with glee when comparing her music to that of early French masters Lully and Rameau, then of course, Faure, Debussy, Messiaen—realizing that indeed she, and truly all of us, live and work in the ongoing cycle of tradition. She loved and respected music as a spiritual force and, with the wisdom of a sage, passionately instilled in others its importance, power, and significance. Using music, she nobly changed lives; there is no greater compliment.” From “Elodie Lauten (1950-2014): Channeling Cosmis Forces,” by Kenneth Hamrick, June 11, 2014

“’Walking in New York’ is an opera without opera’s attributes when it is actually a lovely, effective and affecting example of something else: a song cycle, for vocal ensemble and chamber orchestra. Ms. Lauten has treated Ginsberg’s poetry and its underlying spirit carefully, even reverently. She tucked his personal and sometimes diarylike texts into her own agreeably melodic and eclectic style, but she also appears to have listened carefully for traces of the music that animated Ginsberg’s soil. When she found them, both in direct references and by implication, she incorporated them into her settings in the form of blues melodies, the soulful wail of the gospel singer, hints of jazz and the insistent rhythms and bright melodies of pop music. Perhaps most crucially, she presented Ginsberg’s texts with clarity and directness, never obscuring his ideas or pacing for the sake of a purely musical effect.” From “Music Review: A Libretto via Ginsberg Captures a City’s Spirit,” by Allan Kozinn, The New York Times, June 6, 2001.

In the Small Gallery: 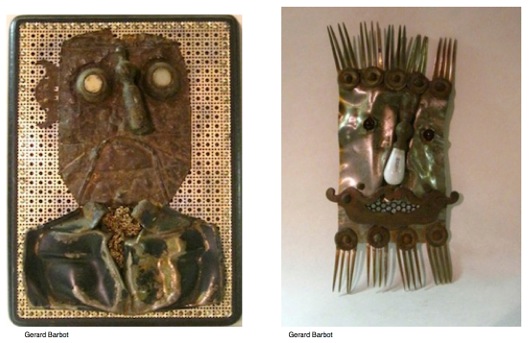 Son of Fernand Barbot, Gerard Barbot was born in Paris, and when he was 5 years old, his parents emigrated to the USA. He now lives in Brooklyn, NY. His childhood was filled with the spirit of adventure and the need to satisfy a curious mind and that led him to the wonder of books, travel and art. His creative activity at a young age was to make collage in order to document and express experiences so that he could visualize his thoughts, aesthetics, emotions, influences and ideas. While working in the building trade industry, he was fascinated by the mesmerizing pyrotechnics of welding, and he was inspired to use a melange of materials and assorted means of construction to create found object sculpture known as assemblage. Gerard has participated in many exhibitions around the world, and his artwork is in private collections. He continues to challenge himself by collaborating with other artists and working in different mediums. He repurposes, recycles and transforms abandoned artifacts and discarded detritus. He invites the viewers to see ordinary objects in unexpected ways.

“This ‘Memorial’ show will fulfill the WAH Center’s “Bridge Concept” mission by bridging man and woman, young and old, 2-dimensional and 3-dimensional works, American and French artists, and fine art with performing art.”

The WAH Center is a Brooklyn-based, non-profit organization founded in 1996 by artist and philanthropist Yuko Nii. It is a multifaceted, multicultural art center, the mission of which is to coalesce the diverse artistic community and create a bridge between local, national and international artists, as well as emerging and established artists of all disciplines. Thus through the international language of art, we come to understand each other to create a more peaceful and integrated world. The WAH Center is a force for peace and understanding and its concept is incorporated in its acronym: “WAH” in Japanese means “peace” or “harmony” or “unity.” Yuko also wanted to preserve the WAH Center’s building, a French Second Empire masterpiece, and make it a functional part of the cultural community in Williamsburg, Brooklyn, New York. The building is Kings County Savings Bank built in 1867, a New York City Landmark and on the National Register of Historic Places.